This week's harrowing of the horror covers Heka, Combat, Character Advancement and Play Advice. Also nad-seeking tazer drones and the truth about what happens if you crossbreed Freddy Mercury and Lemmy.

Chapter 3: Heka
Heka is to Aerth as electricity is to Earth: ubiquitous and utile. Apparently the houses of the wealthy are lit by it, food is preserved by it, and buildings are built with its assistance. This *could* be all kinds of awesome, but there's always a risk that this magic-as-utility take will turn out TEH LAM0RZ. Kitschy efforts like the BECMI Book of Wondrous Inventions [link mildly NSFW for swearing], TSR's Amazing Engine Magitech setting and *shudder* Eberron (Keith Baker's love letter to JRPGs) outnumber brain-stretching tour de forces like Riskail: that's just a fact of life.

Magic use distribution is very Runequesty: everyone gets access to some, specialists get access to more. There's no "You are a fighter, so your magic is the power of hitting things" role protection in Mythus. If you invest in the skills, you can dabble in magic.

There are supposedly three sources of Heka:

So, the spookier and more woo-tastic a thing is, the more Heka it generates. Fair enough.

Heka Values
How much Heka do you get? That's worked out differently for each Vocation (class), generally as 2x total STEEP (points) in your Heroic Persona's (PC's) magic-relevant K/S areas (skills). Thankfully you'll only have to work this out when you create your character. Oh, and again when you increase any of your magic-related skills. 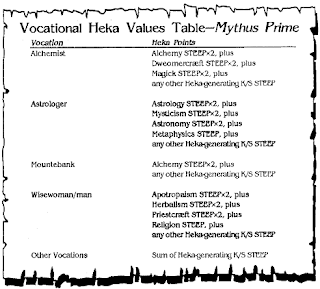 Castings Available
Mythus Prime characters can only use Archetypical Castings. No creating spells on the fly like in Mage; you do what Ars Magica would call 'rotes' and D&D would call 'spells'. Oh, and you can only cast spells in which you have a relevant K/S area. Logical, I suppose.

Sample spells? They're all the way off in Chapter 13 (or fork out more $$$ for the Mythus Magick book).

Note: I flipped ahead to look at the spells on offer and they are ... less than inspiring ... in their evocation of a richly imaginative world of wonder and mysticism. In fact they are so tedious I now desire command of a flight of semi-autonomous bollock-tazing quadrotor drones: only thus can my displeasure be sufficiently expressed.

Casting
So nice and simple then.

Heka Recovery
Similar to D&D, but with some Runequest-ish touches. Full recovery with a night's rest, 1/2 if rest is disturbed. 10 Heka/hour recovered for meditation/esoteric study.

Castings take time to activate depending on their power and complexity. Anything from one Combat Turn for Charms, 5CT for cantrips, 1 Battle Turn for spells, 5BT for forumulae and 1 or more Action Turns for Rituals. All very logical, if a bit reductionist.

Page 23: A boxout with three worked examples of spell casting. This clarifies things nicely for the easily confused and small of brain.

Then we're onto the subject of Heka reservoirs, which are kind of cool. You can use gems, pentacles or pyramids to store Heka for later use. Charging a reservoir costs Heka = its value in BUCs + the Heka being stored. So, say you've got an ornamental stone worth 100BUCS, you can dump 110 Heka into it, and draw on 10 of that at a later date. Gems are one use only (they crumble when drawn upon), pentacles and pyramids can be re-used. Pyramids even generate their own Heka over time. There are rules for overcharging your Heka reservoir, which is likely to make the thing explode in your face for non-trivial damage.

There's nothing to say you can't swap reservoirs with other characters, which sounds like it could mitigate healbot chores somewhat. "You want healed? Got a reservoir charged? I ain't wasting Heka on you. Might need it to chill a side of beef later..."

Chapter 4: Combat
One short paragraph of introduction, and then we're straight into the skull-breaking. Nice and quick, no blahblah. I call Dave Newton.

Mythus Prime combat is profoundly RPG Orthodox in structure. The writers might play fast and lose with jargonics, but combat sequence is Holy Writ And Not To Be Tampered With.

1) Check for surprise, Party vs. GM d% roll, lower roll wins. All members of the side winning surprise get to act first.

2) Individual initiative (on d10, lowest to highest). This is kinda cool, coz the GM doesn't even have to count down initiatives, just call out "1, 2, 3, 4" and have people go when their number comes up. Initiative is also one on the few mechanics not given a distinctive Dangerous Journeys-ism.

3) Attack: roll under Combat skill on d%. Less than 1/10th of skill = max damage. No option to do wacky Hong Kong Action Theatre/RISUS stuff by using non-combat skills in a fight. Pity that. Mythus Prime is avowedly abstract in placing combatants and the text actually say that "Details of weapon range, attacker's reach, changing positions, etc. are left in the gamemaster's capable hands." Whether this is nicely old school in its abstraction, or too bloody lazy by half, is likely a matter of taste.

4) Damage is #d6 (determined by weapon type) minus armour. You take damage directly to your Physique (which is /startlingly/ familiar to someone who's just spent three months immersed in verious iterations of GCX). If damage exceeds Wound Level (75% of your Physique TRAIT) the HP is dazed (half all skills, +2 init penalty for rest of fight). This takes effect immediately. Once damage taken exceeds Physique TRAIT the HP is dead. And I here quote: "That's right. No whining or complaining - once that happens, your Heroic Persona is dead. Time to create a new HP!" Nice to see good ole spike-sitting old school puritan rigour in effect.

5) Once everyone's had their turn roll initiative for next round.

I find it mildly interesting that stabbing someone with a sword in Mythus Prime is mechanically less complicated (5 steps) than inflicting bad juju on them (7 steps). This is a direct inversion of D&D's fire-and-forget magic.

Armour
Six types of armour (Leather/Padded, Reinforced Leather, Metal & Leather, Chain Mail, Plate+Chain, Plate), each of which can be either full- or half protection (1/2 protection, 1/2 price). Full Leather protects for 6 points, Full Plate for 16.
Nice little rule: the more metal there is in your armour the greater the bonus damage you take from electrical attacks. Don't know how that got in there, but I like it.
Armour prices are 750 BUC for full leather, up to 30,000 for Full Plate. Shields have prices, but are described as nothing more than window dressing. *sigh* So that's everyone who can talk their GM into it using two-weapon style then. The people of Mythus-world obviously have severe problems with scuffing on their knuckles thanks to their weirdly ape-like arms.

Missile - thrown go Physique in feet, bows and slings 100-200 yds. No range modifiers, so have fun sniping foolios with pinpoint precision from a furlong off. Damage is 2-4d6.

No prices for weapons in Mythus Prime. Those are over the hills and far away on pp236-239.

Heka in Combat
One page. Pretty simple spell point system, but probably far too fiddly and beancounterish for regular use by humans.

3 example offensive uses:
Heka can either attack Physique, Mental or Spirit stats, which is fun.

Healing Wounds
Heal 1 Physique/day, 2/day with bed rest. Remember that Physique is 20-60 for starting characters. Convalescing? Bring a good book.
First Aid heals 1d6+1. Which is uncannily similar to the old D&D standbys of potion of healing and/or CWL.
Herbalism heals 2-12/day. Them's good herbs!
Heka can be used to heal, and you can boost the amount by expending extra.

The chapter ends with an "Example of Combat" boxout takes up most of page 28 and is liberally scattered with Mythus jargon. I think something strange is happening to my brain; I can just about follow what's being said.

So, five pages of rule for combat so abstract it makes B/X blush. Speaks for itself I think.

Chapter 5: Improving Skills and Abilities
A page to tell you that Accomplishment Points (APs) are awarded by the GM. 5 is average, 10 exceptional. These can be expended to improve skills (1 AP per +1%) and TRAITS (3 AP per +1%). New skills are bought for 5 AP at 5%. Increasing TRAITS after character generation doesn't improve skills that depend on them. That took 2/3rds of a page.

There is pretty cool Daniel Gelon pic of a gnarly Lemmy-looking manticore with Freddy Mercury teeth lunging at some scimitar-armed dude on a flying carpet, so the page isn't completely wasted.

Proper manticore that! Not like the overgrown Mexican Hairless that the 3E MM tried to fob us off with.

Chapter 6: Playing Your HP
A page and a bit of actually useful advice on how to be a good player. It bluntly says that "Knowing your HP, knowing the game, and knowing as much as possible about the real world and fantasy add up to being a good player."

There's a paragraph on being a courteous gamer and gentle admonissions encouraging respect for both the enjoyment of others, and for the effort the GM has put into the game. There are suggestions that communication between players and GM is the key to mutual satisfaction. There's even a short (4 point) numbered list of things even the greenest of neophyte players can do to enhance the game:

This breath of fresh air and common sense is followed by a three page Example of Play. It is an example of play. You have probably read one. This means that you do not need to read another. And that's all I have to say about that.

Next time: Upgrading to the Advanced Mythus Rules and The GM's section of Mythus Prime.