Heresy on the Dying Earth 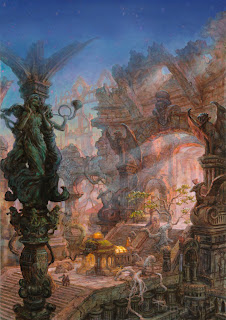 Warning: heresy, wrongbadthink and crimes against nerd orthodoxy ahead.

Jack Vance is over-rated. There, I've said it, and I'm prepared to stick by it however much nerdrage comes my way. Now don't think I say this lightly. For one, I am nothing if not a herd animal, and iconoclasm makes me uncomforable. For two, you don't diss lightly any man who can use the word "nuncupatory" in cold blood and with malice aforethought. But despite that the fact remains that - for me at least - Jack Vance is little more than an 'ok' writer.

I've been re-reading Tales of The Dying Earth recently, soaking up the old school pulpiness of it and hoping that it will grow on me in a way that the grindingly tedious wallbanger Lyonnesse never did (100 pages in and nothing worth caring about has happened? WTF?! Even War and Peace moved faster than that!), and it slowly dawned on me that not only am I not really getting into this book; I'm actually finding it a bit of a slog.

Sure, the language is pretty; yer man Vance can sling words like few others, even if his dialogue is as stilted and mannered as that of a particularly poncy Versailles courtier. But the language in Tolkien, or in Dunsany, or in Clark Ashton Smith, or even in Eric Rücker Eddison's "more verbally baroque than thou" The Worm Ouroborus is equally poetic. And those are stories where, by-and-large, something interesting actually happens.

That's one of my main gripes with the Dying Earth stories: the rigidly linear plotting. Yes, there is spectacle and wit, but there's little sense of suspense or of drama in any of the stories.

That one character in the first book (his name escapes me; great sign of a memorable character that!) who memorises 4 spells, which happen to be exactly the abilities the plot requires. It does make me wonder if there wasn't an element of self-aware parody going on there (plot-significant items, etc). I've seen it said (either over at The Gaming Den, or in a comment on Vance at Grognardia) that the Vancian casting system was a knowing mockery of S&S magic tropes - magic as sufficiently advanced technology; mysterious but reliable, and ultimately a little dull.

The phrase 'mysterious, reliable and ultimately a little dull' could be a damning indictment of the entire Dying Earth idiom. Stuff happens. Then more stuff happens. The characters make witty comments and carry on with their lives. Then some more stuff happens. The end. There is little sense of building dramatic tension, little indication that the plot is actually moving towards a denouement. The stolid acceptance of the protagonists goes beyond cool-headedness into the kind of absurd, intentionally witless stoicism that the Carry On team or Harry Enfield used to parody.

"The sun is dying and all the world will be reduced to darkness. Ancient evils stalk the land and vicious rogues plot ceaselessly against one another."
"Heigh-ho, rum do what? Pass the port."

An air of apathetic ennui and casual callousness pervades the books, which is even stated by one character as people just passing time until the world ends.

Maybe the problem is that I came back to reading the Dying Earth after overdosing on Robert E. Howard, Fritz Leiber, Karl Edward Wagner and David Gemmell. I'm trying to be diplomatic here, but Cugel the Clever - for all the cleverness with which his dialogue is written - is no Grey Mouser, and Rhialto the Marvellous and his largely interchangeable ilk haven't a tithe of the grandiose dark glamour of Red Kane. Cugel, poster boy of the Dying Earth saga and designated protagonist of Eyes of the Overworld and Cugel's Saga Cugel, is at best little more than a mediocre picarro who only seems sympathetic by comparison with the uniformly conniving scum with whom he comes into contact. For ingenuity and audacity the character simply can't hold a candle to the casually magnificent bastardry of Saki's Clovis or Woodhouse's Psmith. Cugel just an unsympathetic schlub to whom things happen in a series of episodic, disconnected vignettes. He draws no conclusions and gains no wisdom from his circumstances, and walks heedlessly into situations which a supposedly cunning roguish character would deftly avoid. Heck, even Elric seems foresighted by comparison!

I will say that Vance can string a pretty sentence together, and that he can worldbuild with the best of them (although his supposedly ancient dying earth has little of the sense of layered history found in Leigh Brackett's or C.L.Moore's evocations of Mars, or in M. John Harrison's better Viriconium stories. As for the kind of sheer outre bizarreness of Moorcock's Dancers at the End of Time: fuggedaboutit), but that simply isn't enough to justify his place in the pantheon IMO. The Dying Earth books are interesting to gamers because they formed part of Uncle Gary's inspiration. As stories in their own right they are of limited merit.

Next week on the Nerd Orthodoxy Outrage Blog (the nOOb): why G.R.R.Martin is a hack writer who can't pace worth a damn, or "food, clothing, gorn and goatboy's taste for young girls do not make for a satisfying fantasy epic".

PS: don't waste keypresses ranting at me anonymong style. Your outrage only increases my arousal!