Today's subject for dissection in the ongoing Let's Read Mythus debacle is Chapter 13: Heka and Magick. Please be warned that this post may contain higher than recommended levels of gibberish and is likely to induce second-hand outbreaks of: 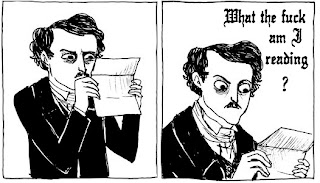 The customary rules apply, with an additional fillip that one should also drink every time the reader is prompted to "buy our other book for full details of this". Because nothing builds bonhomie like a naked cash-grab.


Heka and Magick is a self-confessed crippleware chapter comprising pp276-294 of the Dangly Jibblets: Minkdust rulebook. The introductory paragraph admits that the Castings which follow are no more than "...a sample listing of basic Castings, sufficient to get your campaign off the ground." Where can you get the full skinny on casting in Mythus? Well, if you said in the Mythus Magick book (sold separately), then reward yourself with a drink.

So what do we actually get for our money? Two pages of poorly cross-referenced rules/notes text and a bunch of what anyone not being trollsued out of the industry by Lorraine Williams would just call 'spell descriptions'. Oh, and a new page header: a still life of a squished wizard amid the paraphernalia of his trade.


After a paragraph of shilling for the patch to this broke-ass 400-pages of half-a-game we jump straight into the subject of Heka (pron. HEE-ka). Two paragraphs rehash what we've already been told about half-a-dozen times now: that Heka works like magic electricity; that 'impure' versions of Heka -- variously called Baraka, Orgone or Mana (Mmmmm, thesaurus abuse! *gluk*) -- exist in worlds not as dominated by the Pure Spellcaster Master Race as is Aerth; that even unintelligent creatures can use Heka instinctively; and that Pure Heka is of three sorts: Positive (from the higher places and spheres), Negative (from the Other Place), and Mixed.

Yeah. So far this feels like what it is: a précis of something longer, more involved, and baroquely over-complicated.

Next up: Demographics of Heka. A paragraph spent explaining the prevelance of Heka-slingers in the populace. The figures boil down to 1-in-100 for people able to cast at all, with various sub-breakdowns for who can use what type of Heka; who draws their Heka from one, two or three Attributes; and who gets to be a touched-by-the-dice-gods Full Caster. This is dull stuff and probably billonga setting book, not rules chapter. A more practical use for this section would have been putting the bloody shifty, elusive rules for determining Full Caster-ness here.

Next is half-a-column on Types and Sources of Heka Energy, which starts with a seemingly unrelated paragraph about the nine Grades of Casting Power, and an aside that certain special Grade X castings exist and that these are on a par with Supernatural Castings of Grade I. Nope, not a clue. If you want to know more: cough up for Mythus Magick.

And finally a list of things you can squeeze for Heka in the Mythus universe:

Sources 1-5 are pretty much what you'd expect: push button, recieve mana. But source 6 "Entital vegetable substances" confuses the bejaysus out of me. WTH is an Entital vegetable? Some form of otherworldly arcanocabbage? The freshly-peeled god-corpse of Nazi-fighting root veg Dr Carrot? No clue given. Oh look, they do give us a helpful clue as to which book to refer to...

After that particular unintended Mythusian mindscrew we're off again to half a page + a couple of big-ass tables regarding Heka from K/S Areas. This begins with the word "Imprimus" and goes downhill from there with a load of waffle on who can generate Heka from where, how fast, how much, and from which skills. Most of this is semi-familiar from other chapters, but I lack the will (or remaining SAN) to check if there are contradictions between blocks of text.

One thing that jumps out is a table that would have been useful, oh say, back in the damn skills chapter! To whit: 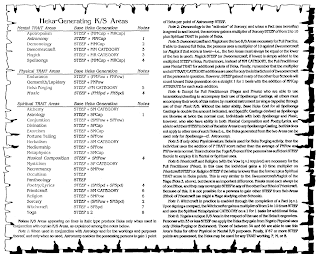 Idiot-savant version of a unified Heka Skills table I ranted about back here.

Now, so far as it goes that is a not-entirely-useless table. At least now -- nigh-on 180 pages after it might have first come in handy -- a player can see at a glance which K/S Areas grant Heka, how much and from what character stats. That might almost be called useful, at least for the purpose of buzz maintenance. *gluk*

And then you realise that thick block of text over there on the right is footnotes.

Yes, the true horror of this brute of a table only really bursts forth when you start digging into the notes. Most of the them either waffle on where a single terse sentence would suffice, or outright re-iterate things we were told back in the relevant skill descriptions. In the latter case "See description, pXXX" is perfectly sufficient.

Call me a grouchy infographics snob, but a case could be made that if footnotes take up more space than the table they accompany, then the way you are attempting to present your information is objectively not right. A first draft is supposed to look like a sharp-cornered, burr-edged, over-complex mess; a professionally designed tool for use in play is not.

A final squeezed-in section on Regenerating Personal Heka tells you how much Heka you get back per hour per skill from your K/S Areas, and also how much you gain back from Attributes, Categories and Traits. It is four paragraphs of word salad that looks like English at first glance only. The accompanying table is especially sad-making. 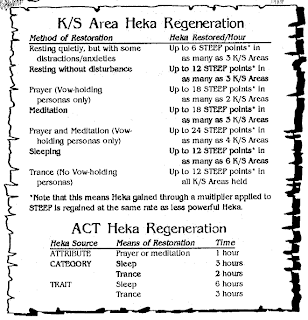 "Prithee good sir. Art thou shittin' me?!"
"Nay sir, I be not. Now draw forth thy slide-rule and get thee to reckoning."

Yes, excellent. No foreseeable problems with player rebellion here. An excellent response to the oft-heard lament that the AD&D Psionics rules were insufficiently fiddly.

And that's your lot on the subtle wonders and intricacies of Heka and Magick in Mythus.

Oh, wait. You want the mechanics for actually using Castings in play? In the Heka and Magick chapter? How precious. How quaint. Those are way back in the earlier Combat chapter, on p218. Which in turn requires reference to the Core Game Systems (chapter 11) and the K/S Area descriptions in chapter 10.

Hope you enjoy the delicious breezes kicked up by repeated thumbing through big fat books, coz you're going to be doing a lot of that. There's not even a single appearance of That Damn Table in the one place where it might have actually have been of some utility. Useless!

Sample Castings
After the seemingly unedited logorrhoeaic HØRF! that opened the chapter we turn with -- probably misplaced -- relief to the spell Casting descriptions which comprise pp278-294 of this slithey tome.

Sample Castings of levels I-V (Roman numeras as original) are given for the schools of Dweomercraft (wizarding), Priestcraeft (clericing), Apotropaism, Astronomy, Herbalism, and Mysticism, at a rate of several per level, which is nice.

"But Chris, you gormless knock-kneed bogmonkey," I hear you cry "Where are all the other types of magickqkck which the many, many K/S Areas of Mythus use? I count a mere six lists there."

Why yes, gentle reader. Although puffing itself as a game that presents nine, sorry, IX levels of magic in nigh-on a score of schools and traditions, the core Mythus book presents only samples of six schools, and only up to level V. As for the rest, they are found in a lost tome of eldritch lore entitled... yes, I think you can see where this is going... *gluk*

Although the vastly superior Imperial measures are used in all instances (I kid you not, there are ranges given in rods, chains and leagues in there!), there are a couple of gross procedural niggles even before getting into individual spell descriptions. The unexplained acronyms are annoying ("WTF is E/F/M? Any corresponding entry in the Glossary? Of course not!), and repeated inclusion of BHC (Base Heka Cost) that remain constant across all schools and levels but are not integrated into a single simple table is just an offence against good design.

That there: not flippin' rocket surgery!

Get past the Mythusisms of the layout and descriptions, and many of the Castings will look familiar to role-playing veterans, albeit with any sense of wonder and magic pummelled out of them by a leaden prose style. For example:

Next Time: We grind the individual Casting descriptions for anything that might actually be of use in a Classic D&D game. It will be as glorious, life-affirming and full of colourful pageantry as Passchendaele. Oh, wait. That's not what I meant at all... 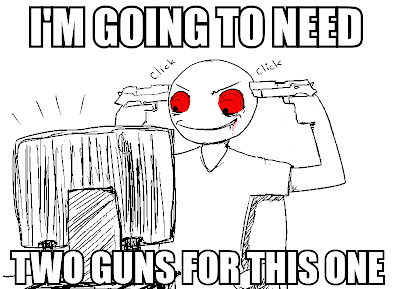